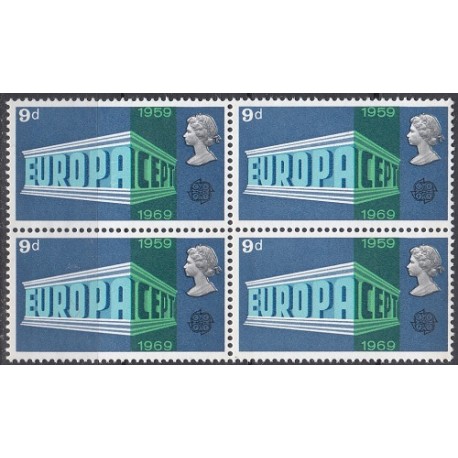 Europa stamps are special stamps issued by European postal administrations/ enterprises under the aegis of PostEurop in which Europe is the central theme.

EUROPA stamps underlines cooperation in the posts domain, taking into account promotion of philately. They also build awareness of the common roots, culture and history of Europe and its common goals.As such, EUROPA stamp issues are among the most collected and most popular stamps in the world.

Since the first issue in 1956, EUROPA stamps have been a tangible symbol of Europe’s desire for closer integration and cooperation and in 1993, PostEurop became responsible for issuing EUROPA stamps. Over the years, EUROPA stamp has gained more interest within the Postal community as well as with philatelist, and reflects the engagement from the members in diligently participating in the competition.

The Europa issue (also known as Europa - CEPT until 1992) is an annual joint issue of stamps with a common design or theme by postal administrations member of the European Communities (1956-1959), the European Conference of Postal and Telecommunications Administrations (CEPT from 1960 to 1992), then the PostEurop Association since 1993.

The first Europa issue dates back to 15 September 1956. The postal administrations of the founding six members of the ECSC issued stamps with a common design: a tower made up of the letters of the word "EUROPA" and surrounded by construction scaffolding.

In 1959, these stamps are jointly issued by the member countries of the European Conference of Postal and Telecommunications, the initials of which (“CEPT”) are displayed on the stamps of the joint issue as of 1960.

There is a common design theme from 1956 to 1973, (with the exception of 1957). However, many countries issue a stamp that does not feature the common pattern but just displays the word "EUROPA". Common theme issues ran out of steam and after 1973, CEPT allowed countries to issue stamps with different designs.

It should be noted that Andorra has issued Europa Stamps since 1966 (French) and 1972 (Spain). Andorra cannot Join PostEurop as its Postal System is looked after independently by both France and Spain.

As before from 1974, the designs freely reflect a common theme. Of note is the CEPT logo indicating it is a Europa CEPT stamp issue. The success of Europa issues among collectors prompted many postal administrations of small countries or territories dependent of European countries (the Channel Islands for instance) to join the issuing countries in the 70s. The number of participants reaches 35 in the 80s. Turkey has participated continuously since 1960, and communist Yugoslavia from 1969. The collapse of the communist bloc brings new issuers as of 1990 to reach 57 countries in the late 90s.

When the CEPT decided to focus more on telecommunications in 1993, PostEurop took over the management of the Europa issues as well as the responsibility for perpetuating the tradition of the EUROPA stamps and ensuring its evolution. Therefore, the CEPT logo has been replaced by a new logo created by PostEurop, i.e. the word "EUROPA" leaning to the right.

Although in 2006 the member countries of PostEurop have chosen the theme of “Integration as seen by young people” instead of a theme related to the 50th anniversary of Europa issues, several countries have issued stamps or stamps on stamps showing the first common designs of the years 1950-1970, most often with the CEPT logo which was no longer found on Europa stamps since 1993. An anniversary logo (the number 50 in the middle of a star with 5 branches) is also featured on these stamps.

In order to promote Europa issues among philatelists, PostEurop created in 2002 an annual competition of the “Best Europa stamp”.

Since 2005, several non-European countries and non-PostEurop Members have issued stamps in connection with this anniversary. In Europe, some countries, including Serbia-and- Montenegro, Albania, Moldova, Gibraltar, Cyprus, etc. also participated in these issues.

Until 2006, only representatives of the various postal administrations were entitled to elect the best Europa stamp during the Plenary Assembly of PostEurop.

Since 2007, the winner is elected through an open and public voting procedure on the PostEurop website.

By January 2011, the new EUROPA logo, preceded by a symbolic reminder of the mailbox, applies, and for the first time, a Jury Prize Competition is designed by seven philatelic experts.